I've been reflecting more on my experience of Mahamudra Shamatha ... resting with the breath.

Continuing from where I got to in my last post ... the breath isn't anywhere ... and it's not a thing. There is no breath as such, nor is it in a particular place. So how do I rest on it, if there isn't a locatable 'it', as it were. 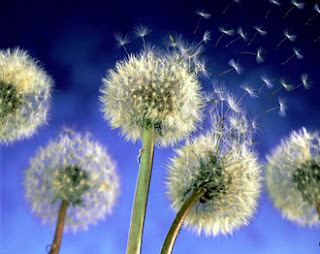 One of the things I've been noticing in particular, is that there is no 'place' or dimension in my meditation. When I visualise Machig Labdron on a lotus above my head, I have a sense of that .... but actually, there isn't any above at all in experience, in mind. Whilst it's true that to a certain extent I can sense things as being spacially in relation to each other .... there's no absolute or real sense of up or down to be found, or any other dimension. Dimension doesn't apply.

The breath isn't there in the sense of perceiving it directly. All I can do it perceive various sensations in the body. And they give a clue that the breath was 'passing by' at that point. It was 'there' ... it was 'here'. And then what do I do? .. I string all those disparate sensations together, and call that 'the breath'. I say conceptually, that these are all 'breath' ... and other sensations aren't. So this is the 'breath'.

But how do I hang around in the area of the nostril? Where is this? Spacially? There's no place, or dimension in mind, in experience, only that which I impute. So I'm hanging around .. my awareness is open, and resting .. some'where' .. but where? Somehow I'm hanging in awareness .. and somehow, I'm resting somewhere ... where I think that the breath will reappear, rather than somewhere else ...

and wherever the breath appears, that's where my awareness is, and rests.

However, then it's not resting on a particular sensation, or set of sensations, like 'nostril' ... but wherever the breath shows up ....

Can't really just switch that off .... and somehow just rest on a particular object .... and become absorbed in that object .... as nothing is so solid anymore ....

Seems like the 'knowing' aspect is there, and doesn't wanna be turned off!

hmm ... random thoughts on where my breath went