Reflections on The Melody of Wisdom : A Supplication to the Wisdom Dakini Niguma

Vajra queen, mother of all buddhas,
Dark-brown woman wearing bone ornaments who flies through space,
You bestow supreme accomplishment on your fortunate disciples:
Noble Niguma, to you I pray.

You were born in the wonderful land of Kashmir,
In a sublime city
Known as Incomparable in the Land of Jambu,
Emanated through Madhyantika's blessing; to you I pray.

In the family circle
Of the pure Brahmin, Shantivarma,
Narotapa and you, the wisdom dakini, were brother and sister
Your karma ripened together like sun and moon; to you I pray.

You are the feminine form of true emptiness,
Sublime among all appearances, giving birth to all victorious buddhas.
Although you manifest in a worldly form,
You renounced any connection to existence through craving and grasping;
to you I pray.

During incalculable past lives, you reached the far shore
Of awakening's stages and paths.
Thus, in this life, you gained the inconceivable, perfect freedom of
self-manifest accomplishment.
Innate dakini, to you I pray.

You did not have to rely on exhausting training
When some advice from accomplished masters entered your ears,
You understood all teachings.
Great bliss of natural liberation, to you I pray.

Knowledge of one subject - the tantras' subtle, profound meaning led to your total liberation
And the flowering of your two forms of knowledge.
You saw directly and without obscuration the truth of the nature of reality.
Illustrious woman of accomplishment, to you I pray.

You bound your mind, eyes, and circulating energy within the expanse of
emptiness,
Permitting you to see in the central channel the [empty] forms created
by the spring vital essence.
Vajra illusory reflections, such as smoke, developed together.
You completed the branch of familiarization; to you I pray.

You used your breath to block the dark circulating energies and made
them descend to your belly.
You joined the vitality and descending energies equally at the six
energy centers,
Blocking the movement of the six elements' sun and moon.
You completed the branch of proximate accomplishment; to you I pray.

You transcended the three seals to reach incomparable Great Seal (Mahamudra).
The innate light of its unchanging, coemergent bliss
Created your ten-faceted illusory body, replete with all powers.
You completed the branch of accomplishment - to you I pray.

You blocked the twenty-one thousand six hundred circulating energies and
attained that many forms of changeless bliss.
At the crown of your head, the mind of awakening became stable,
And you traversed awakening's stages in an instant.
You completed the branch of great accomplishment; to you I pray.

Through engaging in conduct that is enlightenment's direct cause,
You enjoyed many pleasures and were nurtured spiritually by Buddha Vajra
Bearer.
Your fortune equaled his - your body of training's integral union
Works for beings whose numbers equal space; to you I pray.

You saw directly all phenomena without obscuration
And opened inconceivable millions of gates to meditative states.
You master the secret treasury of all victorious ones.
Consort of all buddhas, to you I pray.

Body of great bliss, emptiness and compassion inseparable,
Manifestation of blissful buddhas, sovereign of common and supreme
accomplishment,
Powerful bodhisattva on awakening's tenth stage, glorious guide for beings,
Wearer of Bone Ornaments, to you I pray.

Sentient beings, our venerable mothers, wander along the wheel of life
In endless and fathomless seas of suffering.
With your universal great compassion,
Lead them to a pure land of flourishing, uncontaminated bliss, I pray.

Nurture fortunate persons who have entered the path;
Pacify all adversity, hindrances, and obstacles;
Continually enhance our experience and realization;
And bless us with the completion of awakening's five paths and ten stages.


(A Garland of Udumvara Flowers, pp. 3a-4a, by Jamgon Kongtrul) 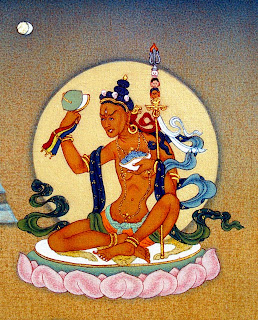 The lines:
"You are the feminine form of true emptiness,
Sublime among all appearances, giving birth to all victorious buddhas."
speaks a lot to meditation experience. So much seems encapsulated there. So much summarised so pithily (is that a word? .. it is now!). So much that can't really be said, just pointed to, by allusion, fingers pointing to the moon.

Once again:
"You did not have to rely on exhausting trainingó
When some advice from accomplished masters entered your ears,
You understood all teachings.
Great bliss of natural liberation, to you I pray."
How wonderful to read these lines, the ease of natural liberation, how different from the hard won struggle so often portrayed. Not that I want it easy, not that I want to project a notion that it *should* be easy ... just enjoying hearing of ease-won liberation, alongside the natural ease of the Mahamudra path of resting mind. How blessed I am to have found this path of no-struggle. How simple the path of self-liberating dharmas. One sees how unnecessary this creation of suffering or struggle is. How wonderful to find the path itself which is without struggle. Seeing the 'problem' of struggle, finding a path beyond that which itself doesn't involve 'struggle'. No longer at war with myself, trying to be something other that what I appeared to be. No longer trying to be somewhere else, not at peace with things. How deeply I pray that all beings find this ease, and allow the illusory chains of suffering to disappear like dew drops in the sun of awareness.

An extraordinary peon to accomplishments ... beyond my imagination, yet so very near.
Posted by Chodpa at 3:42 pm No comments:

Reflections on The Melody of Great Bliss : A Supplication to the Wisdom Dakini Sukhasiddhi

Bestower of uncontaminated, coemergent bliss;
Radiant with the full splendor of sixteen-year-old youth;
Leader of every assembly of dakinis in the three locations
Venerable Accomplishment of Bliss [Sukhasiddhi], to you I pray.

You manifested in a pauper's home in Kashmir
And trained in realization on the path.
Having completed the force of faith and great compassion,
You diligently gave gifts without attachment; to you I pray.

Millions of eons ago, you perfected the cultivation of merit and wisdom
And the result of your training manifested.
The awakening of your karmic connections
Made you renounce home life; to you I pray.

In the land of Oddiyana, source of great mysteries,
Men were spiritual warriors; women, female warriors.
Just by your reaching the center of that gathering,
The power of your enlightened potential awakened; to you I pray.

You demonstrated the skillful means of illusory conduct as a vendor of delicious alcohol.
You gave twice-strained rice alcohol to a female adept.
This created a connection through faith
With a tantric practitioner in the forest; to you I pray.

Noble Virupa accepted you as his disciple
And gave you the full four empowerments into secret practice.
Instantly, your ripened karmic body of sixty-one years
Became that of a sixteen-year-old maiden; to you I pray.

Taking the inner path, you truly traversed in a single moment
The major vajra stages of awakening,
And you appeared in an uncontaminated, vajra rainbow body.
Powerful one of the celestial realms, to you I pray.

You became the manifest form of coemergent wisdom, Buddha Selfless One,
To remain until the end of cyclic existence.
You watch over the three realms' beings during the six periods of day and night.
Honored female buddha, to you I pray.

You manifestly bless those who pray to you
And lovingly watch over your children who preserve your lineage, never parting from them.
You bestow common and supreme accomplishment in a matter of months or years.
Powerful one of great compassion, to you I pray.

Vajra Yogini, perfection of transcendent knowledge,
You appear to help beings in a body that has form.
The exquisite flower of your body, which one never tires of seeing,
Blooms with the marks and signs of physical perfection; to you I pray.

In the Teaching's infinite gates, which have the nature of emptiness,
You speak according to beings' dispositions.
Your speech, invincible sweet sound in every situation,
Flows imbued with the sixty tones of Brahma's voice; to you I pray.

Inseparable bliss and emptiness, the true vajra of space,
Pervades all animate and inanimate life.
Your sublime enlightened mind of luminous Great Seal
Is coemergent and uncontaminated; to you I pray.

Epitome of the qualities of freedom and maturity,
You have an inconceivable life.
Just hearing your voice inspires uncontaminated bliss.
Sublime wish-fulfilling jewel, to you I pray.

You unite in pleasure with all victors and bodhisattvas.
Your emanations reach the four elements' limits.
Like an excellent vase, a gem, or a wish-fulfilling tree,
Your enlightened activity is spontaneously present; to you I pray.

Your compassion knows no distance and embraces all equally.
You guide fortunate persons on the path to the celestial realms.
Your loving face wears the conscientious smile of compassion.
Friend to all beings, to you I pray.

To your child who preserves the lineage and who prays to you,
Show your loving face and joyfully grant me your supreme prophecy.
Bestow the empowerment of great vajra wisdom,
And bless me that I merge inseparably with you. 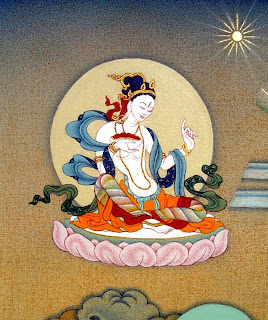 As always with these devotional poems, there's so little to add of any substance. What always strikes me is the beauty of the devotion, the sheer beauty in the heart that lets go in supplication, which opens to that which is possible, even that which seems beyond or impossible from our limited perspective.

Sukhasiddhi's story is inspiring in itself, with her ease of realisation a particular source of gentle encouragement. Not all masters seems to have to take the rough roller coaster ride to liberation!

Her images always seem to open something out deep within me, speaking to me in a way that words cannot. It's strange how some images do this, yet others speak of nothing. So easy to understand why beings grasp at 'explanations' such as karma and past lives to explain this. Why does this need explaining? Why not remain in the not-knowing, and just sit in the wonderment and blessedness?

Profound thanks for the teachings, the lineage, the blessings of Sukhasiddhi and Jamgon Kongtrul, which resonate beyond time and space, and envelop me in their gentle uplift.

For someone like me trained in intellect, how liberating the open heart which inclines to devotion.

And how interesting the whole area of prayer .... of what this is, in its various manifestations.
Posted by Chodpa at 7:12 pm No comments: