Use the Blade to Cut the Blade

Is desire the same as attachment? Most translations of Buddhist terms will use craving or attachment interchangeably. They both are used for when we take an object and exaggerate the positive qualities of that object, and as a result, we feel a neurotic desire to have or possess that thing, whether mental or physical. 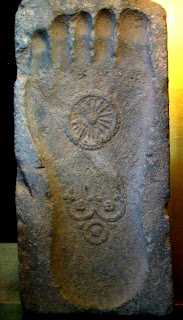 Occasionally however, you see these two terms used slightly differently. Sometimes attachment is used to refer to the stage of grasping (Upadana) in the 12 Nidanas, or 12 stages of dependent
arising. So attachment is seen as the next step on from craving (Tanha). Craving is the original desire for something, and craving is the act of moving towards that object, the action on that initial impulse in order to make it yours. That action results in the clinging on to existence or becoming.

But is all craving really bad? What about the desire to help others? This is indeed a very interesting question! After all, how could be follow a path, the path of Dharma, without having some sort of desire towards the goal of the path! If the goal of the path wasn't attractive, and we didn't desire it on some level, then what would impel us to move towards it, and make all the necessary efforts to attain that goal? Similarly, how could we help others without *wanting* to help them? 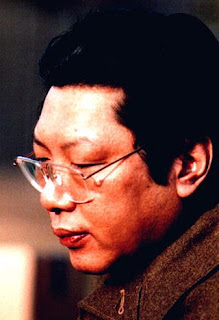 I was reflecting that there are a number of things going on here. One is that we refine our motivations throughout the path. In the beginning we are filled with desire. And our desire towards the Dharma is perhaps little different to that towards any other object. We grasp at it, and are very attached to it. In a sense, it is another set of clothing for our ego. It's perhaps what Chogyam Trungpa Rinpoche used to call 'Spiritual Materialism'.

We might be very attached to going on retreat, for example, or classes, or other things, and overlook the fact that we don't do the fair share of the washing up, or cooking and leave it conveniently to our partner.

We might be overly precious about Dharma objects, and actually respond to them with desire and attachment, rather than genuine devotion.

However, over the course of time, and practice, we gradually transform our minds and actions, and gradually we find that we are less attached, and more able to act from love and compassion and generosity. As such, there's less 'me' in all our actions. There's less concern for what we get out of it, and more concern for others. Beyond that, we become less concerned in a sense for others (in the sense of still seeing them as distinct objects) and just do what needs to be done ... just act, but without the sense of an 'I', an 'other', or the 'action'.

Along the way, we refine out the sense of self (and selfishness) and so our 'desires' if you call it that are more and more freed up from craving in the sense of trying to get something to make our sense of self feel better, or to validate its existence.

I think it's good to recognise that in the early days our motivations (which is what creates karma) is always going to be mixed. There'll always be a bit of 'me' in there amongst our concern for others. We don't need to beat up on ourselves for that, for not being perfect straight away .... isn't just how it is ... it's just where we are starting from. But, over time, those motivations will change if we practice correctly. And then we'll be less concerned with ourselves, our actions will be less impure and tainted by egotistic concerns, and we'll act more and more from love, compassion and generosity.

So we use the blade to cut the blade. We use desire ... our desire to walk the path, to attain to Buddhahood for the sake of all sentient beings .... we use that desire to bring about the transcending of our own little desires.

It does seem to me that it's useful to recognise that short of Buddhahood our actions are likely to have some 'me' in there somewhere. But, we have to act, and we have to travel the path. So we act as best we can, with the best motives we can, and trust that we will increasingly act from purer motives. To the extent that you desire something good for another, then you create good karma. To the extent that that desire is tainted by some sort of desire for our own self to gain out of that (perhaps by being seen to be 'good' or 'Buddhist'), then we create some mixed or even negative karma. But the extent to which there is no thought of 'I', 'Other' or 'action' at all (which is further down the path), then we create less karma at all, whether good or bad.

One of the epithets of the Buddha in the Pali Canon is 'he who leaves no track' i.e. he who creates no karma whatsoever.

I was reflection on the notion that attachment or desire is not just for objects, but also for our sense of self. We are not only attached to things of the material world, (and also to thoughts and emotions), but also to our sense of who we are too. 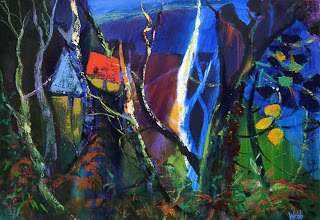 All of them we think of as existing in their own right, as being 'things' as it were.

Beyond this, we think of that 'thing' as having characteristics. And we typically exaggerate those characteristics of those things which we are attached to. We blow them out of proportion.

So there is the problem of not seeing something accurately in the sense of exaggerating its characteristics, whether that is of beauty, value etc. But deeper still goes the problem of actually thinking this thing is truly exist - it has a real existence with an enduring, unending lifespan.

Yet, as the teachings tell us, and we can see in our experience, nothing lasts, and nothing truly exists in that solid, unchanging sense as we believe. Everything that appears to our mind is like an illusion - it most certainly seems to appear, yet as we look for it, we cannot truly find it. It appears to abide nowhere, it appears to arise from nowhere, and we cannot see where it goes to. In short, it's an empty appearance.

So at root our desiring and grasping at things involves this miss recognition of how things actually exist.

The extent that we still feel there is an 'I' doing, a 'receiver' of our actions, and an 'action' itself, i.e. we haven't seen through the empty nature of all of these, then our actions will be tainted by ignorance, most likely manifest in desire and ill-will, and result in some karma.

But it's not an all or nothing. We start where we are .... and we do the best we can, and trust in the power of the path and teachings (and teachers) .... to allow us to develop and purify our actions .....
Posted by Chodpa at 7:53 pm No comments: