Flickering in the Wind

It is said that trying to see the nature of mind without first training the mind in resting (or Shamatha) is like trying to see around an old dark room which is only lit by a candle which is flickering wildly in the wind. How hard is it to see things, and even when we do, how can we be sure of what we see?

When the mind is trained in resting naturally, whether on objects, or without objects, then we gain the ability to see clearly and deeply into what is, and what appears to be.

So the basis for realising 'how things are' is the ability to rest the mind with stability. Mind Still. In practicing Shamatha, there is mostly placing of the mind, but there is also some analysis going on - a necessary work of checking up on our practice, noticing if there are any faults, and rectifying them with the appropriate remedies.

In practicing Vipassana (the method of looking into the nature of the mind), there is most certainly analysis - the posing of questions as it were, for us to directly establish the answers via direct perception, but there is also placement too. Without the ability to remain at rest, our analysis would just decend into proliferation of thought, and we'd be lost in that thought and carried away by it.

So both Shamatha and Vipassana contain placement and analysis, just in differing amounts.

And without the ability to rest the mind, there would be no Shamatha and no Vipassana either.

Labels: how things really are, nature of mind, resting mind, shamatha, vipassana, without an object

In an important sense, both aspects are not the same. From the relative point of view, are they the same? Do they both appear in the same way?

Perhaps the traditional way to say this is that both have the same essence - i.e. that of emptiness, or the nature of dharmata. Sometimes saying they have the same reality seems to create confusion for some people .... as if reality was 'something' which is in some way existent, whether 'behind' or 'within' what we perceive ....

Whether mind is at rest or mind is moving, it has the same essence - emptiness ...


"Why do we need to purify something like Karma which doesn´t actually exist?"

Perhaps saying 'it doesn't actually exist' suggests something too strong - maybe 'doesn't actually exist in the way we think or assume it exists' is sometimes a more useful description? Sometimes we say 'doesn't exist' as that strongly corrects our opposite assumption, but we can swing too far the other way too, and so 'doesn't exist in the way we assume it to exist can then be a useful corrective.

But regarding the point of doing purification of karma practices - well absolutely, they are a skilful means. And so is cultivating a still mind. In this case, the main reason we learn to cultivate the still mind is that it is the easiest place for us to start looking at the nature of mind. In other words, we cultivate mahamudra shamatha in order to practice mahamudra vipassana.

Once we have some skill at shamatha, and are not swept away by thoughts that arise, then we are able to look at the mind at rest and see its nature, look at the mind in movement (i.e. with thoughts - usually by deliberately causing a thought to arise) and see its nature, and look at mind with appearances (i.e. the arisings from the other 5 senses), and again see its nature. What we will see will be the same essence in each case - emptiness. But the conventional nature will not be the same in each case.

So without the ability to reside in shamatha and not get swept away with thoughts, we are not able to cause thoughts to arise, and to see into their nature. We'd just be caught by those thoughts, and carried away, and then lose our ability to see deeply.

So we aren't trying to get away from mind with movement all the time, and just be in mind without movement, or still mind .... but using the practice of cultivating mind without movement so that we have the ability to look directly at the nature of the mind - however it is ..... when we can look at mind however it is, then it doesn't matter any more how it is, we can always just look deeply. So all of life, all of our experience becomes fertile ground for seeing, all of it comes onto the path, and all of it is truly 'practice'.

(responses on a Dharma list)
Posted by Chodpa at 4:38 pm 3 comments:

Hi there, just a quick post (and unusually personal post) to say that I've been in hospital for a week due to a slipped disc. It's been a painful time, to say the least, but at least one which gave me much time for reflection.

It was very sad being in the hospital - there were a lot of very old people there in the ward with me, suffering greatly, many of whom were so lonely, and really disorientated, and really not with all their faculties. It was heartbreaking seeing them so.

All in all it was an extraordinary experience in the hospital - so much going on around me, and so much opportunity to meditate, pray, and reflect on life. I'm struck so powerfully over how my life is so very full of blessings, and I felt much gratitude and joy whlst in hospital. There truly appears to be so much suffering in the world. And yet one sees people trying to alleviate the sufferings that beings undergo.

So much seemed to happen whilst in the hospital, yet what truly happened?

Something of a Bardo, an opening, a blessed chance to assume a somewhat altered vantage point, and have the space free from obligations to bring much awareness to bear.

How vicious indeed are the illusory sufferings of samsara ..... may all beings immediately awaken from forgetfulness
Posted by Chodpa at 7:59 pm 7 comments:

At night, deep in the mountains I sit in zazen.
The affairs of men never reach me here.
In the stillness I sit on a cushion across from the empty window.
The incense has been swallowed up by the endless night;
My robe has become a garment of white dew.
Unable to sleep, I walk into the garden;
Suddenly, above the highest peak, the round moon appears.

In my early days of Dharma, I was so inspired by Ryokan and his poetry. My hero was Milarepa, and the ideal of the hermit, in a cave or hermitage, far from other humans, solitary, sat in meditation - the idea of this was my source of strength and sustenance. What a beautiful ideal - sitting long hours, looking deep into mind, with only the seasons, animals and nature for company. What more could one want!

It's funny how life pans out. Early on in my Dharma days, my first daughter was born, and my life became the family man. Yet my ideal remained the hermit. The way in which I held these two simultaneously - engaged with family and society, and renunciate of worldly ways was the dynamic and story of my Dharma practice. As the years have gone by, my meditation and practice has become less and less about being in particular conditions, and more and more about simply seeing into the nature of mind, however the shimmering shapes that appear in it may be.

More and more I feel like the hermit inside, who lives in the world, yet is somehow not bound by it. How beautiful the image of the Buddha, who thoroughly embodied this - in this world, yet not of it! How must that be like, to fully live that to the core? Not caught on the hooks of desire and ill-will, not grasping at appearances, but able to freely move through them as you would move through a rainbow. 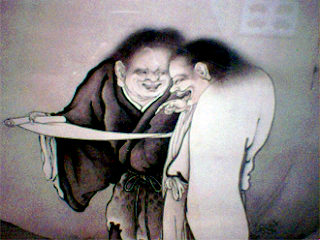 How wonderful it is to have family and friends, to experience the richness of what arises in life, yet not be bound to it through falsely imagining solidity where there is not. As my mind loosens, and appearances slowly release their entrancing grip on attention, I find an openess and freedom to glide and slide. How beautiful this release from the tightness of grasping!

If the fruits of practice are this sweet with my poor efforts and realisation, then how must the ultimate fruit be!!!!

May all beings find this peace through loosening the intoxication of illusory appearances, and find the freedom of compassion that flows from the mind that is released!

(This poem is so beautiful ... the wonderful way Ryokan describes how things are ... just the bare description, without judgement and interpretation ... and as always, the beautiful ending .. the moon appearing .... one feels something of how that would feel in that context ... how beautiful, how fitting, how perfect, each thing in its place, just what it is, nothing less, nothing more .... simply 'thus' ....)
Posted by Chodpa at 3:24 pm 5 comments:

Since no essence exists anywhere,
Its expression is completely unobstructed and manifests everything.
Pervading all of samsara and nirvana like space,
It is the ground of all confusion and liberation,
With its self-luminous consciousness
And its alaya-vijnana.
As for the cognitive aspect of this neutral state,
Its essence is empty and its nature is luminous.
These two are inseperable and are the quintessence of insight.
It is space, ungraspable as a thing.
It is a spotless precious clear crystal.
It is the glow of the lamp of self-luminous mind.
It is inexpressible, the experience of a mute.
It is unobscured, transparent wisdom,
The luminous dharmakaya, sugatagarbha,
Primordially pure and spontaneous.
It cannot be shown through analogy by anyone,
And it cannot be expressed in words.
It is the dharmadhatu, which overwhelms mind’s inspection.

From the Vajra Song of the First Jamgon Kongtrul Rinpoche

Will I ever tire of reading these types of songs, and allowing them to speak deeply to my being? 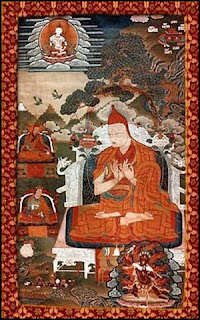 Each time I come across another song by a realised master, trying to express the inexpressible, another ray of light illuminates my heart, and opens my mind, just a little.

A glimpse ... an opening ... a sudden loosening of concepts, and the arising of openess and let-go-ness - expansive luminous openess:
"It is the dharmadhatu, which overwhelms mind’s inspection."

These words go deep into the heart, and cut like a knife through my 'must-know' mind, allowing a spaciousness of mind to arise, and devotion to fill the heart. How blessed indeed we are, us of fortunate karma, to meet with these excellent teachings, so ever-potent across illusory time and space!

How 'ever-present' the gurus, their words endlessly echoing, always there, always being, always resonating. Never not having been, always there. The illusion of arising, seemingly just heard, yet always known, always close, always waiting to be revealed, the thin veil effortlessly lifted.

May these moments of illumination fill all beings mindstreams, and remain endlessly present, until even the word 'samsara' is no more heard!
Posted by Chodpa at 10:20 pm 2 comments: