Some sleepy reflections when unable to sleep whilst ill ...

The nature of the mind is non-arising,
What need is there of knowledge and views?
Originally there is not a single dharma;
Why discuss inspiration and training?

Niutou Farong begins with the view, a view which includes the need to go beyond views. When we rest in awareness we are able to see that mind cannot be found, that experience cannot be found. It has no shape, no characteristics ... wherever we touch we find only melting, vast open no-thingness. This groundless nature of mind is non-arising. Why? Because that too we cannot find. It's not as if we've exchanged the seemingly solid stuff of ordinary existence with some profound 'thing' or 'reality' or 'transcendental' which somehow underlies all else, which somehow has eluded us up to now, and *now* we've got it, now we have the 'real deal', the 'real thing'. Nope, this groundlessness isn't there, it can't be found, or grasped, or seen. We all try to do that in meditation, to grasp onto how emptiness reveals itself. 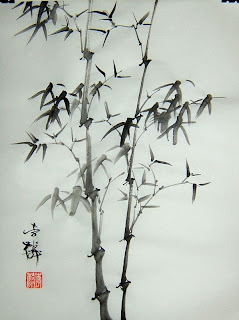 To understand it rather than to know it ... but .. the nature of mind is non-arising. When we know this, truly and deeply, then words are a very poor substitute for this direct knowingness. Not even a finger pointing at a moon. More like a finger pointing to a moon which is altogether different to what 'moon' is to most of us. Not one 'thing' pointing to 'another thing'. One thing, pointing to no-thing. How things are? You won't find a single experience that can be grasped onto or held, however sublime. Not a single dharma originally exists. That's how it is, both prior to and after all that practice and training. You're just spun around and walking backwards through it all. Just not knowing yet.

Coming and going without beginning;
Sought for, it is not seen.
No need to do anything;
It is bright, still, self-apparent.

When we rest in knowing, though utterly groundless, yet endless appearances seemingly arise. Mind's nature is luminous, though utterly without ground. Empty appearances arise unimpededly, arising and ceasing, though where are they? When you rest in knowing, appearances clearly arise. Yet can you say where? Can you say when? Where and when just don't apply. Resting in knowing, mind has no shape. Yet when appearances are clearly there, has a shape come into being. Has mind/experience changed in any way. It seems to have, yet utterly groundless it remains. All these appearances - thoughts, feelings, stories, sensations, perceptions ... can any be truly found? Tell me ... where are they? Cause a thought to arise right now ... where is it? Did mind change when it arose? Did mind change when it ceased? You can seek for experiences ... profound experiences, wholesome experiences instead of the stuff you don't like, but this utter emptiness never changes, minds nature remains as is ... and all that seemingly arises, self-liberates, back to where ... who knows? From where? who knows. Profound mystery indeed. Never understood, but can be known. Bright and luminous, unmoving yet unceasing, revealing itself as Mahamudra always, however minds content should be. All of Samsara and Nirvana are not different to this. All experiences are of the same nature ... so why seek for certain experiences? for enlightenment, for purity, for something special?

The past is like empty space;
Know anything and the
Basic principle is lost,
Casting a clear light on the world,
Illuminating, yet obscured.

When appearances arise, they are vividly present. Yet soon they are gone. Where did they go? Watch closely. Know. However acute the mind, you won't see where they went. Our memory of them is what? More empty arisings. Groundless like empty space. Niutou here uses the word 'know' in a way I'm using the word 'understand'. Know anything and the principle is lost. I'd say, try to understand anything with concepts, with conceptual mind, and you are a million miles away. These words mislead. They are not suchness. Allow them to point directly, don't try to understand them. When we have our hard-won conceptual understanding, we think we finally know everything, the world is our oyster, we sit astride it .... illumined and understood. Yet the next disturbing emotion arises, the next pattern ... then bang! .... suffering again! Understanding will not save you!! .. hehehehe.

If one-mindedness is impeded,
All dharmas are misunderstood.
Coming and going thus,
Is there need for thorough investigation?

You won't see much ... meaning, you won't know it as it is if you mind cannot rest. Otherwise all you'll see is the waves, not the ocean. Mind you, the ocean isn't 'behind' the waves, like we all thought, like some pristine true reality, which we've never glimpsed. More like you see one thing, but it's something else, not behind it, or within it, or more truly it .... in one and the same thing, known differently, known as it is. These very appearances - anger, hopelessness, happiness, frustration, peacefulness .. not seeking to exchange one for the other, to get from one to only the other. Just knowing experience as it is. Then samsara *is* nirvana. Then samsara and nirvana are known to be inseparable. Without the ability to rest the mind, you'll only see everything that's stirred up and muddy. And then everything is misunderstood, experiences taken as solid and enduring, all dharmas are misunderstood.

Arising without the mark of arising,
Arising and illumination are the same.
Desiring to purify the mind,
There is no mind for effort.

Appearances don't leave any trace, like the bird flying across the sky. Does it leave a trail?

Spontaneous wisdom
Throughout time and space
Nothing is illuminated;
This is most profound.
Knowing dharmas is non-knowing;
Non-knowing is knowing the essential.

This knowingness which is incontrovertible. Which knows with a certainty that understanding never approaches. Which itself is vast, open and empty. Across all experience. Where does awareness begin? Where does it end? When looked for it's nowhere. Yet, equally, it's everywhere. Depends on how you wish to express it. You can't find it, yet it fills all of experience. Boundless and unending. Spontaneously co-arising, it knows appearances as they arise. It knows emptiness for what it is, ultimately illuminated, known as it is ... yet does emptiness or appearances change when they are known thus? Nope, just as they were. Illuminated, yet not illuminated. And this knowing, this incontrovertible direct seeing? Is that 'something'? Something you can grasp, something that you can understand, to intellectually makes sense of? Nope, non-knowing. A direct knowing which can't be found. A direct knowing of the one thing which makes a difference, ultimately. That all other realisation relies on. Knowing the essential frees you. This one aspect of all that seemingly arises. Don't get lost in the jungle. Know this one thing. Then you are at base-camp, and the journey can begin.

The nature of the mind is non-arising,
What need is there of knowledge and views?
Originally there is not a single dharma;
Why discuss inspiration and training?

Coming and going without beginning;
Sought for, it is not seen.
No need to do anything;
It is bright, still, self-apparent.

The past is like empty space;
Know anything and the
Basic principle is lost,
Casting a clear light on the world,
Illuminating, yet obscured.

If one-mindedness is impeded,
All dharmas are misunderstood.
Coming and going thus,
Is there need for thorough investigation?

Arising without the mark of arising,
Arising and illumination are the same.
Desiring to purify the mind,
There is no mind for effort.

Spontaneous wisdom
Throughout time and space
Nothing is illuminated;
This is most profound.
Knowing dharmas is non-knowing;
Non-knowing is knowing the essential.

Using the mind to maintain quietude,
Birth and death forgotten;
This is original nature.

The highest principle cannot be explained;
It is neither free nor bound.
Lively and attuned to everything,
It is always right before you.

There is nothing in front of you;
Nothing, yet everything is as usual.
Do not belabor wisdom to examine it;
Substance itself is empty and obscure.

In past, present, and future,
There is nothing;
No mind, no buddha.
Sentient beings are without mind;
Out of no-mind they manifest.

Distinguishing between profane and sacred,
Their vexations flourish.
Splitting hairs deviates from the eternal.
Seeking the real, you give up the true.

Discarding both is the cure,
Transparent, bright, pure.
No need for hard work or skill;
Keep to the actions of an infant.

Clearly knowing,
The net of views increases
Stillness without seeing,
Not moving in a dark room.

Wakeful without wandering,
The mind is tranquil yet bright.
All phenomena are real and eternal,
Profuse, yet of a single form.

Going, coming, sitting, standing,
Don't attach to anything.
Affirming no direction,
Can there be leaving or entering?

There is neither unifying nor dispersing,
Neither slow nor quick.
Brightness and tranquility are
Just as they are.
They cannot be explained in words.

Mind is without alienation;
No need to terminate lust.
Nature being empty, lust will
Depart by itself.
Allow the mind to float and sink.

Neither clear nor clouded,
Neither shallow nor deep.
Originally it was not ancient;
At present it is not modern.

Now it is non-abiding;
Now it is original mind.
Originally it did not exist;
"Origin" is the present moment.

Bodhi has always existed;
No need to preserve it.
Vexation has never existed,
No need to eliminate it.

Natural wisdom is self-illuminating;
All dharmas return to thusness.
There is no returning, no receiving;
Stop contemplating, forget keeping.

Much gratitude for your blog, Chodpa!

Thank you both for your kind comments .... may you both be well and happy :-)

what is alakshana ?i am unable to understand.can you please guide.

I can only point to what my own experience is. These things are to be known directly, in experience. Understanding them (conceptually) is of very limited usefulness, especially with regards liberation. Only knowing can liberation .... conceptual understanding cannot do that.

Having said that .... Alakshana is pointing to how, when you rest deeply in knowing, you cannot find any characteristics to mind at all.

Again, if you have sufficient capacity of attention, and know how to rest in the knowing, you will see that you cannot say anything at all about how large or small that experience is. It lacks any signs or characteristics of size.

This is what Alakshana is pointing to.

very best wishes to you in the Dharma ...