Reflections on Milarepa - The Song of Distinguishing the Four Yogas

I bow down at the feet of the supreme lama!

It’s the mind fixated on objects that causes samsara.
If you recognize as spontaneous
The luminous self-awareness, free of fixation,
You’ll taste the fruit of the first yoga, one-pointedness.

Luminous mind itself, free of fixation,
Is naturally blissful, without constructs.
If you recognize your very essence to be as clear as space,
You’ll taste the fruit of the second yoga, simplicity.

In the dharma body, appearance and emptiness are not two,
Samsara and nirvana are experienced as one.
If you know the Buddha and sentient beings to have the same identity,
As many have said: that’s definitely the third yoga, one-taste.

Some talk and talk about “oneness,” but they still want to make a point.
Such hazy confusion
Has no place in the yoga of one-taste.

Conceptual thoughts are in nature great awareness;
Cause and effect are non-dual, spontaneous.
They’re the three bodies,
And knowing this is the fruit of the fourth yoga, non-meditation.

“Oh, what wonderful advice!” exclaimed the yogi from Gutang. 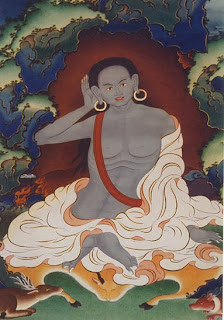 Translated by Nicole Riggs.
from 'Milarepa: Songs on the Spot.'

"It’s the mind fixated on objects that causes samsara.
If you recognize as spontaneous
The luminous self-awareness, free of fixation,
You’ll taste the fruit of the first yoga, one-pointedness."
- It's so easy to mistake experience for fact. The difference is in some ways vast between 'seeing' the world as solid stuff 'out there' and us as solid and 'in here'. Or just recognising appearances as shimmering mirages, dream-like appearances, that dance and play, yet have no enduring existence of them own which is worth grasping onto and giving over our life to their control.

It's interesting how in days gone past I'd view Shamatha as primarily about honing down on an object - concentration, which somehow equated to a narrowing of focus. Now, I guess I see it more as a matter of opening out awareness, allowing some 'thing' to come into view, and allowing 'view' to open - whatever awareness illuminates - well, that is empty yet apparent .... so instead of narrowing down onto a semi-solid object, I'm now mixing awareness with appearances, and emptiness, which doesn't have the same sense of focussing down.

So you could say that my Shamatha has the flavour of Vipassana. Mixed. As the Dorje Chang Thung prayer stanza on Shamatha says:

As is taught, unwavering attention is the body of meditation;
whatever arises is the fresh nature of thought.
To the meditator who rests there in naturalness,
grant your blessing that meditation be free from intellectualization.

What's interesting there is that the meditator is urged to rest in 'naturalness', and what arises to minds eye, as it were, is 'the fresh nature of thought'. Well, that isn't a seemingly solid object being fixated upon, but more the seeing at one and the same time of things as they truly are, and as they appear - this as the basis of Shamatha.

This is the basis of the First Yoga, the Yoga of One-Pointedness.

"Luminous mind itself, free of fixation,
Is naturally blissful, without constructs.
If you recognize your very essence to be as clear as space,
You’ll taste the fruit of the second yoga, simplicity."
- I remember long ago on a retreat at Amaravati, the Theravadan monastery in the UK, being taught that we are really caught up in the content of our experience and little interested in the form of experience, and that this
change of inclination is what facilitates the arising of insight and thereby liberation.

Similarly from a Mahamudra approach, creating an interest in the nature of experience and not just attaching to what arises in experience is a profoundly useful change of orientation. Seeing that all appearances are empty, all thoughts are empty, and that that which seems to experience thoughts and appearances is also empty - this changes the way we experience, and lessens our grasping onto experience. As such, mind itself reveals itself as blissful in and of itself, and thereby again lessens are need to chase after pleasurable experiences. Though appearances seem to arise, they are no longer experienced as solid and objectively given, but reveal themselves to be dreamlike in essence - open, illusive and utterly groundless. As such, life becomes inherently simple, with no need to play the games of push and pull at experience, picking and choosing, endless conceptualising, and difficult to know what to do. The doer does what needs to be done, not-doing, just allowing action to arise from the resting, luminous mind.

This is the basis of the second Yoga, the Yoga of Simplicity.
Posted by Chodpa at 4:14 pm